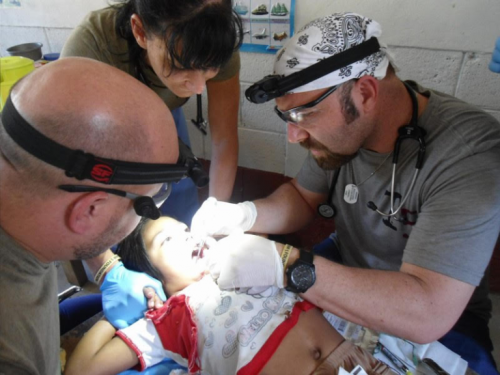 Imagine taking a six-month sabbatical to lead small volunteer teams across 5 continents in 5 months to provide medical assistance to some of the most overlooked and indigenous regions of the world. That’s just what member Eric Linder, RMP, FAWM, is doing through his nonprofit headquartered in Las Vegas, Team 5 Foundation. Team 5 is a medical foundation comprised of special operations forces, ultra-athletes and survival experts who venture to the most remote locations on earth to educate local healthcare workers, provide remote medicine and donate supplies so they can be self-sufficient. The foundation has no political or religious affiliation, they are there to “just do the right thing with no strings attached.”

So what kind of background prepares you for creating such an organization? A 30-year history in law enforcement, military, international peacekeeping and corporate security and safety.

Linder started in 1986 in Aerospace Rescue in the United States Air Force, and later cross-trained to Security Police and served in Operation Desert Storm. He has served as a Diplomatic Protection Agent and is the recipient of several medals and accommodations, including the USAF Achievement Medal.

Linder later joined the Las Vegas Metro Police Department and served in several units including gang intelligence, fugitive detail, tactical medic and crisis negotiator. While on LVMPD, he received an international fellowship to Israel for intelligence, tactical medicine and counter terrorism. He worked in units such as INTERPOL, Border Guard, and their Special Forces Combat Search and Rescue Team, Unit 669 (Pararescue).

After 9/11, Linder joined the Federal Air Marshal Program as an agent, tactical medic and instructor. In 2004 he was deployed to Kosovo on an international peacekeeping mission as the director of major crime. Linder is also a NREMT certified Tactical Medical Practitioner, an instructor of Medical Person-in Charge for maritime, and a lecturer at the School of Medicine, University of Zagreb, Croatia, where the foundation runs a student shadow program.

It was several years later during his Remote Medical Practitioner training at the Belize Institute of Tropical Medicine where his passion for remote care gave him the idea for Team 5, which is now in their 9th year. After their first few missions, they realized dental, children’s and women’s health needs were significant and that veterans often had the most relevant experience working in these austere conditions. This is the premise for their teams of five, 90% of which are veterans - one doctor/surgeon, two special forces medics, an oral surgeon and a pediatric intensive care nurse. These teams fly, ride, paddle and trek for countless hours into thick canopy jungles where there’s no electricity or GPS signal, treating an average of 1,100 patients per trek while focusing on education and training in order to make a long-term impact after each deployment is complete.

Learn more about the incredible work of Linder and his nonprofit at team-5.org. They are always looking for new recruits that want to help "change lives, one village at a time."