Team 5 Deploys on a Two-Part Mission 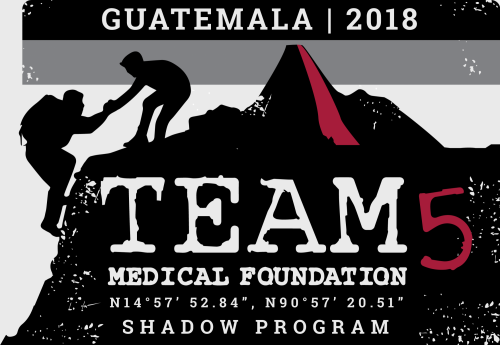 The team will deploy to the jungles of Guatemala just off Lake Isabel on the eastern side about an hour boat ride west from Livingston in an area called Quebrada Seca. At this location the team will deploy each day to a new location treating the indigenous Mayan's where it is normally overlooked. In these locations we will run dental, medical, ultrasound and outpatient surgical clinics, donate LuminAid solar lights, reading glasses from Americares, toothbrushes and medication. Also each village will be dewormed, wellness checks provided for pregnant mothers and prenatal vitamins and ultrasounds will check the progress.

The team has been formulated for maximum impact and is as follows:

Adam Slank
Board of Advisor
Drone pilot and videographer

After spending several days in the jungles hot and humid environment, they will deploy for a 5.5 hour bus ride to the latest volcano disaster at Volcano De Fuego. They will spend 3 days running medical, dental and outpatient surgical clinics along with assisting in rescue attempts and recovery to parts of the volcano where the government has yet to reach. Below is the info on the eruption.

An eruption resulted in at least 159 deaths and at least 300 injuries, 256 missing persons and residents being evacuated, and the closure of La Aurora International Airport.

Beginning in 2002, the Volcán de Fuego entered a new active period, with more or less continuous activity, interspersed with monthly eruptive episodes. These episodes would typically send ash falling on communities within 20km of the volcano, and lava flows about 1-2km from the summit, and the occasional pyroclastic density current.

On 3 June 2018, the volcano suddenly produced its most powerful eruption since 1974. Large pyroclastic density currents were produced that over-topped the barranca boundaries they had previously been confined to and unexpectedly hit El Rodeo, Las Lajas, San Miguel Los Lotes, and La Reunión villages in Escuintla, which buried the towns and killed many of the surprised residents. Later, 18 bodies were found in the village of San Miguel Los Lotes. Ash fall extended as far as the capital, Guatemala City forcing the closure of La Aurora International Airport. The military assisted in clearing ash off of the runway. Rescue attempts were seriously hampered as routes into the affected regions were seriously damaged by the pyroclastic density currents.

This is the Team 5 daily schedule: Follow and see how it unravels as we know, nothing goes as planned no matter how well you prepare, but be dynamic and you'll float right along just fine.

16th: Transport by bus 5 hours to Lake Isabel, 1 hour by boat to @fincatatin which is our basecamp for 6 days.

24: Half day at volcano, donate supplies, lights, medications and all left over gear. Late 24th, 2 hour drive to Guatemala City. Debrief over a team dinner...

What we will see is always a mystery. With the volcano, we have no clue. But when we responded to the 7.5M Earthquake in San Marcos, we were very busy and burned the midnight oil. This is not your normal response team. This is a very unique, hand selected group of Dr's, SF Medics, Survival Experts and Medical Students who have volunteered to venture to the unknown to do the right thing.

All of this is possible because we have the best of the best sponsorship and followers.