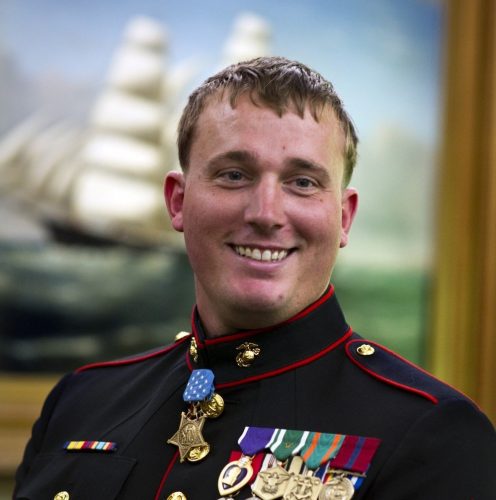 Meyer deployed to Fallujah, Iraq in 2007 as a scout sniper with 3rd Battalion, 3rd Marines. He gained national attention for his actions in Afghanistan during his second deployment in Kunar Province with Embedded Training Team 2-8.[6][7]

On 8 September 2009, near the village of Ganjgal, Meyer learned that three Marines and a Navy Corpsman, who were members of Meyer's squad and his friends, were missing after being ambushed by a group of insurgents. Under enemy fire, Meyer entered an area known to be inhabited by insurgents and eventually found the four missing servicemen dead and stripped of their weapons, body armor and radios. There he saw a Taliban fighter trying to take the bodies. The fighter tackled Meyer, and after a brief scuffle, Meyer grabbed a baseball-sized rock and beat the fighter to death.[8] With the help of Afghan soldiers, he moved the bodies to a safer area where they could be extracted.[9] During his search, Meyer "personally evacuated 12 friendly wounded and provided cover for another 24 Marines and soldiers to escape likely death at the hands of a numerically superior and determined foe."

Meyer stands at attention after receiving the Medal of Honor from U.S. President Barack Obama during the Medal of Honor presentation ceremony in the East Room of the White House, Washington, D.C., 15 September 2011.
On 6 November 2010, the Commandant of the Marine Corps, General James Amos, told reporters during a visit to Camp Pendleton, California that a living U.S. Marine had been nominated for the Medal of Honor. Two days later, Marine Corps Times, an independent newspaper covering Marine Corps operations, reported that the unnamed person was Meyer, citing anonymous sources. CNN confirmed the story independently two days later.[11]

On 9 June 2011, the Marine Corps announced that two other Marines on Meyer's team in Ganjgal would receive the Navy Cross, the second-highest award for valor a Marine can receive. Capt. Ademola D. Fabayo and Staff Sgt. Juan J. Rodriguez-Chavez were recognized for their roles in retrieving the bodies of the fallen Marines and Corpsman. Before Meyer began searching for the missing servicemen on foot, Rodriguez-Chavez drove a gun truck into the kill zone with Fabayo manning the truck's machine gun.[12]

When President Barack Obama's staff called Meyer to set up a time for the president to inform him that his case for the Medal of Honor had been approved, they were told Meyer was working at his construction job and were asked to call again during his lunch break.[13]

Meyer was awarded the Medal of Honor in a ceremony on 15 September 2011.[14] When a White House staffer contacted Meyer to arrange the ceremony, Meyer asked if he could have a beer with the president.[15] He received an invitation to the White House for the afternoon before the ceremony. Meyer also requested that when he was honored, simultaneous commemorative services should be held at other associated locations to honor the memory of his colleagues who died or were mortally wounded during the ambush and his rescue attempts.[16]